The sculpture just installed at Resurrection Cemetery in the Diocese of Madison delivers emotional impact on the many losses created by children killed by abortion. There is the mother, slumped down in almost inconsolable grief. The lost child, appearing as a 4-year-old girl, reaches out. Perhaps the biggest impact is created by the father, so often left out of the abortion discussion. The abject horror shown on his face at seeing the daughter who was never born has the power to take one’s breath away. Pro-Life SculptureThe new work by Slovakian sculptor Martin Hudáček shows the pain of abortion through the father and mother. It was recently installed at Resurrection Cemetery in Madison, Wis. (Photo by Joseph M. Hanneman)

“The donors of this statue were really moved by it because it had the man there as well,” said Damian Lenshek, director of cemeteries for the Diocese of Madison. “For anybody who’s attracted to the statue and the meaning of the statue, this is going to be a meaningful place for them.” The donors wished to remain anonymous, he said.

Created by internationally known Slovakian sculptor Martin Hudáček, “The Memorial of Unborn Children II” tells many stories through its three characters. It is the followup to an earlier Hudáček work that received widespread acclaim — a statue of a grieving mother with her unborn child reaching out in mercy and forgiveness. The new sculpture adds the father into the abortion story, a detail being hailed by pro-life advocates.

“I like the connection between the pro-life movement and the cemetery. I think cemeteries are very pro life,” said Lenshek, who oversaw installation of the statue and the granite cremation columbarium on which it rests. “We picked this spot because it’s along Speedway (Road). We wanted people to be able to see it as they drove by. We also wanted it to be a place where people could come to pray and meditate.”

In recent weeks, a crane was brought in to set the 10,000 pounds of black granite for the columbarium, which will hold the cremated remains of the faithful in small compartments called niches. The crane then set the life-size sculpture of the family that never was. A brick terrace was installed around the foundation. Extensive landscaping is planned, along with two granite benches for visitors. Memorial bricks will be sold for anyone wanting to memorialize a loved one. Lift and SetA crane was used to lower the Martin Hudáček statue onto a new columbarium at Resurrection Cemetery in Madison, Wis. (Photo courtesy Diocese of Madison)

“The Memorial of Unborn Children II” is an outgrowth of the original concept, created for a burial site in Wroclaw, Poland. “People from Poland came to me and we discussed the options to show that miscarried children and aborted children are not missed only by their mothers, but by the fathers, too,” Hudáček told Catholic World Report. “The statue shows that abortion affects all of society. We should help both mother and father. The story must be told that both are hurt by the loss of their child.”

The entire project took about three years, Hudáček said, including one year to create the final sculpture design. After the initial statue was dedicated in Poland, he created life-size replicas now on display in Svidnik, Slovakia, and the new one at Resurrection Cemetery in Madison.

The statue is intended to foster a culture of life. “The message is that the loss of the child affects the culture of the family. It has a wide-ranging effect,” Hudáček said.  “Let us consider unborn children as children. Protect them from the prenatal stage. They are the most vulnerable. Thank God some politics are aware of this and take a responsible approach to this topic.”

Pro-life leaders across the United States hailed Hudáček’s work for its inclusion of the father and its overall emotional impact.

“Today I took the time to really look at the photos of the man in this beautiful statue. The look on his face spoke to me, that he did not know about his aborted child,” said Dan Miller, state director of Pro Life Wisconsin. “It seems to me that his gaze is not directed to his daughter’s eyes, but to her hands. It speaks to his shame in the whole situation. The mother has her head buried in her hand and hair, sobbing. The statue evokes so much emotion and speaks perfectly to the loss that abortion truly is. It is truly a masterpiece, but one I wish never had to come to be.”

Vicki Thorn, founder of the Project Rachel healing apostolate and executive director of the National Office of Post-Abortion Reconciliation & Healing, said the inclusion of the father is significant. “It’s a statement that doesn’t get made often enough, because in my opinion from all the years of doing the work I do, the fathers still get forgotten,” she said. “They’re not sure where to turn because they don’t know, what are they supposed to do?”

“It’s all about the woman. But even in terms of biology, it’s not,” Thorn said. “Fathers have biological changes before the mom even knows she’s pregnant, by scent. He’s in a dance with her in a very real way. We know men undergo physiological changes during the pregnancy. Everybody sort of discards that because we’re an abortion culture. It’s all about the woman, but he’s in the dance. We just don’t have that kind of expression of the equal pain.”

Thorn said the statue has great potential to make a positive difference. “My hope is it gives them permission to grieve. But the problem is, so often after an abortion the couple breaks up. So he’s no longer with her and he feels really disenfranchised when the question of what happened comes up.” As for the landscaped garden planned for the area around that statue, she said, “It could be a healing place, because it is an affirmation both to a woman and a man that this loss was significant.”

Kevin Burke, co-founder of the post-abortion-healing apostolate Rachel’s Vineyard and author of Tears of the Fisherman: Recovery for Men Wounded by Abortion, said men often experience confusion, conflict, shame and grief about their role in the death of their child. “This touches upon their natural role as protector and provider of their offspring – abortion attacks this aspect of a man’s identity, and leaves him emotionally and spiritually wounded as a man, and as father,” Burke said.

The Hudáček sculpture captures the anguish of men who were powerless to prevent their child’s death, Burke said, but also offers hope for healing when he was part of the decision to abort the baby. “I really appreciate the artist having both parents expressing their regret and sorrow, and reaching out to the child,” he said. “The father embraces the mother, offering her comfort. This man who may have led her to make this tragic decision, now offers support and comes together in repentance, and in their shared desire to reconnect in love with their child.”

When men wounded by abortion seek healing, their repentance and grief can help in the healing of the mothers of aborted children, said Fr. Frank Pavone, national director of Priests for Life. “Many think of healing after abortion as the reconciliation of mother and child, and that, of course, is a key element of it. But this statue brings to the foreground a fuller picture of the healing that is needed, as mother, father, and child heal together,” Pavone said. “And indeed, it also opens our minds to the awareness that multiple other people are involved too: grandparents, siblings, other family members, friends, and the abortionist and his or her staff. Everyone is wounded together by every abortion, and everyone needs to heal together.”

Pavone, who serves as pastoral director of Rachel’s Vineyard and the Silent No More Awareness Campaign, said more men are coming forward who realize how abortion has devastated them. “Those who try to claim that abortion is just a ‘woman’s issue’ and that men have nothing to say about it, and that the law should not allow them to do anything about it, deeply misunderstand the dynamics of abortion,” he said. “Men cannot have an abortion procedure on their bodies, but they do commit the sin of abortion in their souls. They commit it by choosing it, consenting to it, and sometimes forcing it. On the other hand, men also suffer because they tried to prevent an abortion but could not, or did not even know of the pregnancy until the abortion was over.” 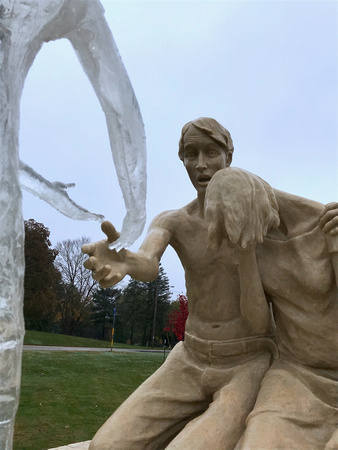 Shock and RegretThe father’s expression reveals shock and grief at seeing an image of his aborted child, now age 4, who reaches out in mercy. (Photo by Joseph M. Hanneman)

Dan Zeidler, president of Family Life Council Inc., said the sculpture has an uplifting messages of hope and healing from abortion, but also for those who lost a child to miscarriage or had a child die early in life. (Zeidler and Hudáček presented a replica of the original statue to the Holy Father in Rome in October 2015.)

“I am so impacted by this second sculpture, which also incorporates the figure of the father who has lost a child,” Zeidler said. “It is so powerful. The strong emotion it conveys reflects, I think, the suffering of the father who is reaching out to connect with his lost child and thru this contact, healing and comfort will hopefully come. And the way he comforts and supports the grieving mother is so real.”

“I hope the sculpture will help those on their healing journey, and that it will bring awareness to the wider community of the devastation that the loss of a child brings to a family and the need to treasure all children, born and unborn,” Zeidler said. “Ultimately, I think it communicates hope.”

“Men are programmed by God to provide and protect their offspring. This is one of the reasons why men are affected,” Mattes said. “I see the man in the statue reaching out to his aborted daughter in a futile attempt to protect her.” Mattes said he is glad to see “this memorial to the unborn includes the grief and shame of both the mother and the father, often the silent victim of abortion.”

Bishop Donald J. Hying of the Diocese of Madison will bless and dedicate the statue and the columbarium on Nov. 2, All Souls Day. • Pro-Life SculptureThe new Martin Hudáček sculpture is visible to traffic on busy roads on the west side of Madison, Wis.