MADISON, Wisconsin — The Second Person of the Holy Trinity was given a police escort up riot-scarred State Street to the Wisconsin Capitol building on Saturday, followed in triumphal procession by 2,000 Catholics who proclaimed in word and deed that Jesus Christ is the antidote to our troubled times.

The escort provided to Jesus in the Blessed Sacrament was fitting for a king. Madison police blocked off streets in a big section of Downtown Madison. A single squad car with emergency lights blazing cleared the path for Bishop Donald J. Hying of Madison and Archbishop Jerome E. Listecki of Milwaukee to bring Jesus to one of the most troubled spots in America. The thousands who followed bore witness to the message that only Jesus can heal our wounds.

“What a blessing to carry Jesus Christ in His Eucharistic glory through the streets of Downtown Madison,” Hying said on the steps of the Capitol, the very spot where rioters rampaged just two months ago. “It was a sweet weight.

“Every time the world has faced suffering, violence, every time the people are filled with fear, the Church has brought out the Eucharist and processed the Eucharist in the streets — in procession because we know it is the power of this Eucharistic Christ that can bring about the fullness of what each human heart seeks, and that is union with God.”

The Unite Wisconsin procession started at Holy Redeemer Catholic Church at the sound of the Angelus bells at noon Saturday. It was a similar, but much larger, procession to one held on the feast of Corpus Christi in June. Much of life in downtown Madison came to a standstill as Hying carried a gold monstrance under canopy southwest to State Street, then east to the Capitol. He was preceded by nearly two dozen girls in First Communion dresses, who scattered flower petals like the fronds laid down in Jerusalem on Palm Sunday. The monstrance was followed by Archbishop Listecki, numerous priests, seminarians, altar servers and a group of laity that stretched for two city blocks. It was a sight for the ages. Despite the size of the event, no secular media covered the procession.

Videographers from Men of Christ shot footage along the route. A drone flew overhead, documenting the event from an eagle’s-eye view. As the procession reached the Capitol Square, the crowd began praying a patriotic Rosary, mentioning names of the states between the mysteries. The procession stopped on the southwest steps of the Capitol, the scene of riots on June 23 and 24. At 12:45 p.m., Listecki took the monstrance and elevated it toward State Street, then to the south and north. The crowd then said the Divine Praises.

Saturday’s events were the brainchild of Kevin O’Brien, co-founder of Men of Christ, a Milwaukee-based apostolate that sponsors an annual men’s conference. He said the idea came to him several weeks ago after his wife awoke at 5:30 a.m. in tears over the state of society. He also heard from many people through a virtue-based athletics program he and his boys participate in. He said people are bewildered and frightened by current events, with the ongoing Wuhan coronavirus pandemic, Black Lives Matter violence in Wisconsin and across America, movements to “de-fund” police, among other issues. 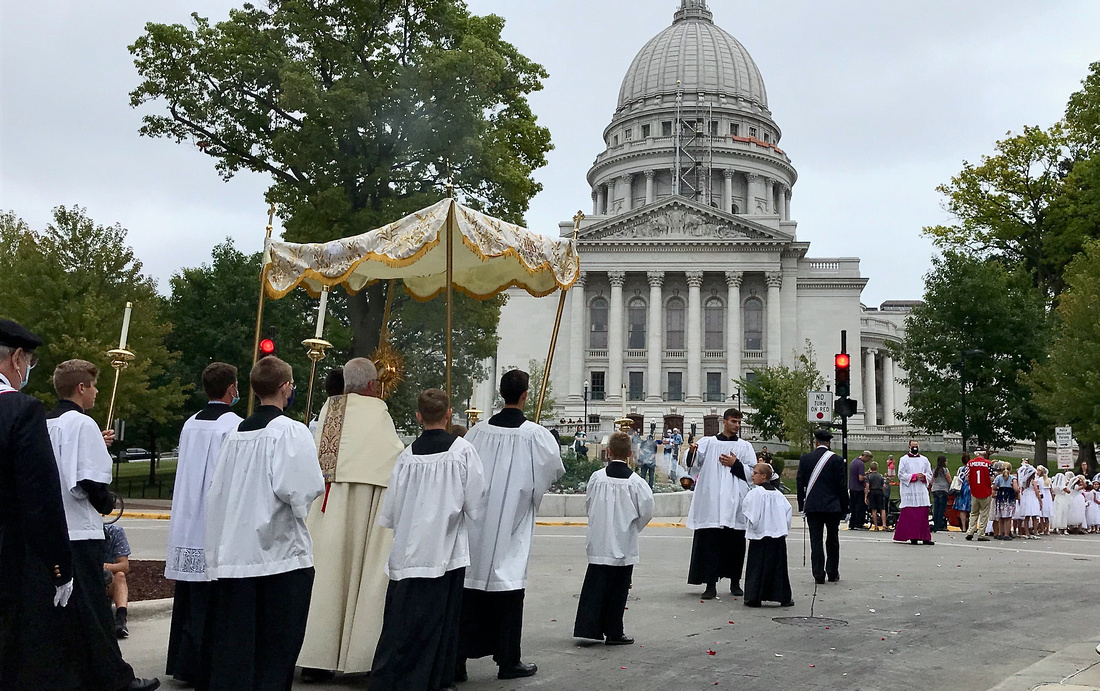 Riots No MoreMore than 2,000 Catholics walked up State Street to the Wisconsin Capitol Building as part of a Eucharistic Procession. (Photo by Joseph M. Hanneman)

“There’s such a need right now,” O’Brien told Catholic World Report. “It literally feels like everything is upside down.”

“We really said, ‘Let’s unite all the bishops in Wisconsin,’ ” O’Brien said. “Let’s go to the Capitol. Let’s actually do a procession by taking Christ into the world, by activating the intercessional prayer of Mary and being public. That takes courage, and we need Christian courage. Being courageous means you are afraid but you do it anyway.”