MADISON, Wisconsin — Stating local health officials likely do not have legal authority to order closure of schools, the Wisconsin Supreme Court issued a temporary injunction late Thursday suspending the Dane County health agency’s August and September orders that forced all schools to close classrooms to in-person instruction in grades 3-12 due to the COVID-19 coronavirus.

“Multiple arguments — constitutional, statutory and administrative — are lodged against the order,” the 11-page ruling read. “While reserving the remaining claims for later disposition, we conclude that local health officers do not appear to have statutory authority to do what the order commands.”

The court issued an injunction against Public Health Madison & Dane County’s Emergency Order #9 and enjoined the agency from enforcing it. The court’s 4-3 ruling means Catholic and other private schools that challenged the closure order can open for in-person classes starting Monday. The injunction was effective Thursday, Sept. 10. St. Ambrose Academy of Madison led a coalition of Catholic schools that in August petitioned the Wisconsin Supreme Court for an emergency injunction holding the closure order in abeyance. St. Ambrose raised nearly $109,000 using a crowdfunding web site to hire the Troutman Pepper Hamilton Sanders law firm to challenge the closing order. 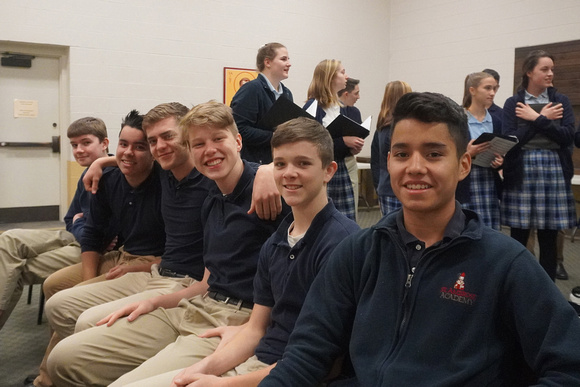 Catholics Back to SchoolThe Wisconsin Supreme Court order allows students at St. Ambrose Academy in Madison and other county schools to return to classroom instruction as the court reviews a challenge to a local school-closure order, brought by eight Catholic schools. (Photo courtesy St. Ambrose Academy)

St. Ambrose announced it will open for classroom instruction in grades 6-12 on Monday, Sept. 14. “We are ecstatic that the Wisconsin Supreme Court has recognized the right of parents to choose how to educate their children. Our families know the risks; they’ve assessed them carefully and are prepared to go to great lengths to protect their kids,” said Joan Carey, executive director of St. Ambrose Academy. “But they also know that putting children in front of computer screens hour after hour and day after day and even month after month causes irreparable harm.”

Public Health Madison & Dane County issued Emergency Order #9 after close of business on Friday, Aug. 21. Many Catholic and other private schools were scheduled to open the following Monday, so parents had to scramble to arrange child care and schools quickly switched to distance learning via the internet. Most public schools in Dane County had already decided to start the school year with virtual learning, but many Catholic, Christian and non-religious private schools planned to open for classroom instruction this fall. The closure order hit especially hard for students with disabilities and those under Individualized Education Plans (IEPs).

“Our parents have been utterly overwhelmed trying to find ways to move their children’s education forward while juggling work and the little ones running around underfoot,” Carey said. “Shouts of joy are echoing through the homes of our families tonight. Our kids can’t wait to see their friends again, to make new friends, and to be back with their teachers who love them. Our teachers can’t wait to greet their students in person and restart the conversation that got shut down in March: that beautiful back-and-forth conversation that happens between teacher and students in community with each other that is the essence of the joy of learning.”

Rev. Scott Jablonski, pastor of St. Francis Xavier Catholic Church in Cross Plains, said his parish school will be open to all grades on Monday. “It is frustrating that we had to go down this road in the first place, but I am grateful that the court saw through the illogic and injustice of the order and is willing to hear our arguments going forward if need be,” Fr. Jablonski said. “In the end I am most happy for our students and their families, since they were the ones who suffered most over the past two weeks. I look forward to welcoming all of our older students back to school this coming Monday and being able to teach them more about Jesus and the ways of authentic justice.”

Scott Grabins, technology director for Edgewood Campus School in Madison (4K through grade 8) who has one daughter at Edgewood High School, said he is thrilled with the court ruling. “As a parent, I know my daughter is anxious to get back into the classroom, see her friends, and continue with the school year,” Grabins said. “As an educator, I’ve worked closely with teachers as they’ve had to pivot from in-person to virtual instruction throughout the start of the school year.  They care deeply about providing the best possible instruction to students regardless of the format, but there’s no doubt in my mind that meeting in person is the best option. Hopefully the Wisconsin Supreme Court will resolve this soon and provide some certainty to everyone.  In the mean time, I’m just looking forward to getting back to school.”

The case has raised important legal questions about whether unelected local health officials have legal right to issue diktats to in essence close public and private K-12 schools for in-person instruction during COVID-19. The Dane County agency has argued it has broad police powers under state law in order to control what it believes to be a dangerous pandemic, while St. Ambrose argued the Wisconsin Legislature specifically omitted the power to close schools from state statutes governing local health officers. The conservative majority on the Wisconsin Supreme Court sided with the schools, writing that power to close schools “is statutorily absent.”

Water CensorshipA City of Madison worker uses a power washer to sweep away a protest message against the COVID-19 school-closure order, written in pink chalk by students on the sidewalk outside the City-County Building. (Screen capture/YouTube)

The court’s majority disputed Dane County’s assertion that public health director Janel Heinrich may do “what is reasonable and necessary for the prevention and suppression of disease” and the agency’s closure order is a permissible restriction on public gatherings. The ruling said “what is reasonable and necessary cannot be read to encompass anything and everything. Such a reading would render every other grant of power in the statute mere surplusage.” Interpretation of state statutes that health officers have “carte blanche” authority “would call into question compatibility with our constitutional structure.”

Angry parents descended on a recent meeting of Public Health Madison & Dane County, providing testimony on the hardships being caused by the closure order. Parents and students protesting in front of the City-County Building wrote messages in pink chalk on the public sidewalk, including, “Let kids go to school safely.” Within minutes, city workers appeared with a power equipment and washed away the chalk lettering. On Sept. 1, the health agency amended Emergency Order #9 to allow students with disabilities and those under IEPs to attend in-person instruction.

As of Sept. 10, Wisconsin has had 84,881 cases of COVID-19, which is caused by the Wuhan coronavirus. Nearly 1,200 deaths have been due at least in part to COVID-19, according to state data. Just over 300 people are hospitalized with COVID-19 (Wisconsin has 11,500 hospital beds). According to an analysis of state data by the MacIver Institute, there have been no deaths of people under age 20 due to COVID-19. Only 2 percent of all COVID-19 deaths were people under age 40.