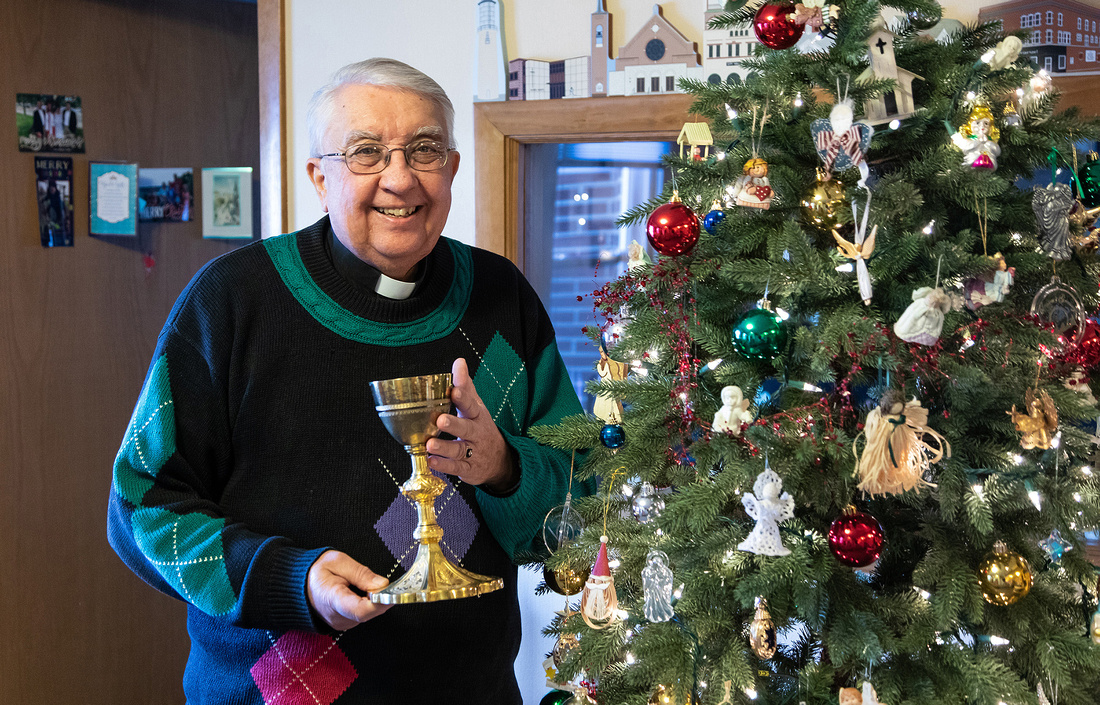 SUN PRAIRIE, Wisconsin — After a journey of 114 years along a path that remains shrouded in mystery, the ornate gold chalice used by a young priest at his first Holy Mass has come back to his home parish just in time for Christmas.

Henry Joseph Kraus, who was known as Otto, was 22 years old when he said his first Mass at Sacred Hearts of Jesus and Mary Catholic Church on Sept. 7, 1905. He was ordained to the priesthood four days earlier by Archbishop Sebastian G. Messmer at St. Augustine Catholic Church in Milwaukee.

Parishioners at Sacred Hearts gifted Kraus with a gold chalice, which held the Precious Blood at the Solemn High Mass said by the newly ordained Father Kraus. Along the outside of the foot of the chalice, the inscription reads: “In Memory of My First Mass September 7, 1905 — Presented by Sacred Hearts Congregation, Sun Prairie, Wis.” 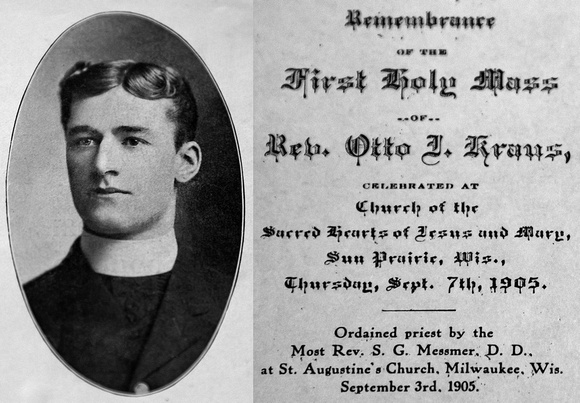 The 1905 card for the first Mass of Rev. Otto Kraus at Sacred Hearts of Jesus and Mary Catholic Church. (Photos courtesy of Sacred Hearts/Mary Gehrmann)

Some 114 years and  three months later, the chalice was held up next to the rectory Christmas tree by Msgr. Duane Moellenberndt, pastor of Sacred Hearts of Jesus and Mary. “It’s a wonderful gift to the parish,” he said, reflecting on how such a precious, blessed artifact made its way back to Sun Prairie. “It’s a marvelous gift.”

Otto Kraus studied for the priesthood at St. Francis de Sales Seminary near Milwaukee, under its longtime rector, Msgr. Joseph Rainer. He went to the seminary just before the turn of the 20th century from his family’s 115-acre farm a few miles east of Sacred Hearts church. His parents, Engelbert and Emma Kraus, eventually sent two sons into the priesthood.

Otto was the only priest ordained in the Archdiocese of Milwaukee on Sunday, Sept. 3, 1905. The following Thursday, the new Fr. Kraus celebrated Solemn High Mass at Sacred Hearts, using the inscribed gold chalice to hold the Precious Blood of Christ.

The chalice has engraved and extruded details on the foot, stem and node. The bowl has an engraved band halfway down from the lip. The foot of the chalice is hexagonal with slightly in-curved sides. The top of the foot features debossed images of vegetation. The foot is inscribed, but not with Fr. Kraus’ name; something that later presented a challenge in determining its original owner.

The Mass was just the joyous occasion the parish badly needed, coming just weeks after the sudden death of its longtime pastor, Rev. Alouis J. Kuehne. Father Kuehne, 48, had led the Sun Prairie parish since 1880. Otto Kraus served as sub-deacon for Kuehne’s Solemn Requiem Mass on Aug. 16, 1905. Also assisting at the Mass was Aloysius M. Gmeinder, a parishioner who lived on the farm immediately south of the Kraus property. Gmeinder was a year behind Kraus at St. Francis Seminary. 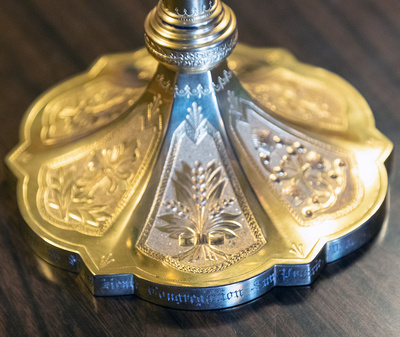 The chalice has a hexagonal foot with curved sides, accented with debossed artwork. The stem, node and bowl have detailed engraving. (CWR photo by Joseph M. Hanneman)

Moellenberndt said the current practice is for a seminarian to receive the chalice for his first Mass from family. “I don’t know if it was true in those years, but when I was ordained, typically your parents gave you the chalice,” he said. “So it’s important not only because of what it’s used for, but also because normally it’s your parents or your family that gives you the chalice that you use for your first Mass.”

Father Kraus’ first assignment was at Holy Trinity Catholic Church, one of the oldest parishes in Milwaukee. After 18 months, he was named pastor of St. George Catholic Church near Sheboygan Falls, Wis. It’s not clear exactly how long his pastorate lasted, but ill health forced Fr. Kraus into a very early retirement. By mid-1910, he was back home on the family farm near Sun Prairie.

For nearly two decades, Fr. Kraus lived with his mother. After his father died in 1912, the family moved to Sun Prairie, settling in a home just a few blocks from Sacred Hearts. Monsignor Moellenberndt said it’s possible Fr. Kraus celebrated Masses at his home parish during those years, a practice followed by other retired priests over the decades.

After Fr. Kraus’ mother died in October 1926, he moved to Oshkosh, Wis., and became a resident at Alexian Brothers Hospital. That is where he died on Jan. 17, 1929. He was just 46. His younger brother, Rev. Aloysius P. Kraus, sang the Solemn Requiem Mass at Sacred Hearts on Jan. 21, 1929. Aloysius was ordained to the priesthood in 1912 and was pastor at St. Joseph Catholic Church in Waupun, Wis., at the time of his brother’s death. Father Otto suffered from goiter, an enlargement of the thyroid gland at the base of the neck, according to Mary Gehrmann, a longtime Sacred Hearts parishioner and grand-niece of the Krauses.