'The False Shepherd' Part I: the Figure-Eight

The Catholic news web site ChurchMilitant.com on Jan. 6 began publishing our six-part investigation on sexual corruption in the Catholic Church during the reign of Bishop Daniel Leo Ryan of Springfield, Ill. The series on Bishop Ryan grew out of our earlier investigation of the 1998 murder of Fr. Alfred J. Kunz. More than 22,000 words are dedicated to exposing the filth during Bishop Ryan's tenure. The series will be published weekly, concluding on Feb. 10, 2020.

The False Shepherd: Bishop Daniel Ryan
Was a Study in Corruption & Coverup

THEY CALLED IT THE FIGURE-EIGHT.

Homosexual men cruising for sex partners in Springfield, Ill., drove a regular route around the downtown Amtrak station. East on Washington Street to Fifth Street, south to Adams Street, west to Fourth, north on Fourth back through the station to Jefferson Street. It was an endless loop. One of the frequent travelers on this path of perdition was none other than the Most Rev. Daniel L. Ryan, then bishop of the Catholic Diocese of Springfield in Illinois. His trips were not about saving souls, however — indeed they put his and many others in deep peril.

PART ONE: THE FIGURE-EIGHT

“He was one that would do the cruise. It was common knowledge,” said a onetime runaway who worked the streets as a prostitute. “If you were gay or you were a prostitute or you were a drug addict down there at that time, you knew the bishop.”

It was in the Amtrak parking lot where that former prostitute, Frank Robert Bergen, first met Bishop Ryan in late 1983. A teenage Catholic school graduate, Bergen was living on the street after running away from home. He turned tricks to make quick cash. He was around 16 at the time of that first meeting. Ryan was 53. “Being in downtown Springfield alone and without no money, I found out prostitution was an answer,” Bergen said. “Around that time I was introduced to Bishop Ryan through other prostitutes in the downtown area as good money and a way to live. I was pretty, blond-haired, blue-eyed and he took a liking to me.”

Bergen approached Ryan as he sat parked in his maroon Toyota Corolla. “He asked me if I was a cop and I said, ‘no.’ And I asked him if he was looking for company and he said, ‘yeah.’ ” That first meeting ended with Bergen and Ryan having sex in a room at the Holiday Inn South. It was the first of countless similar paid meetings over the next dozen years. Bergen said he came to know the bishop as steady money: $50 for starters, upwards to $200 — with an occasional $300 the bishop’s limit. As he became a regular favorite of Ryan, Bergen was treated to meals at the Red Lobster on Dirksen Parkway and other restaurants. Ryan paid for groceries and bought clothing, but cash was Bergen’s favorite payment method. It helped him feed his appetite for cocaine, LSD and the occasional crystal meth. 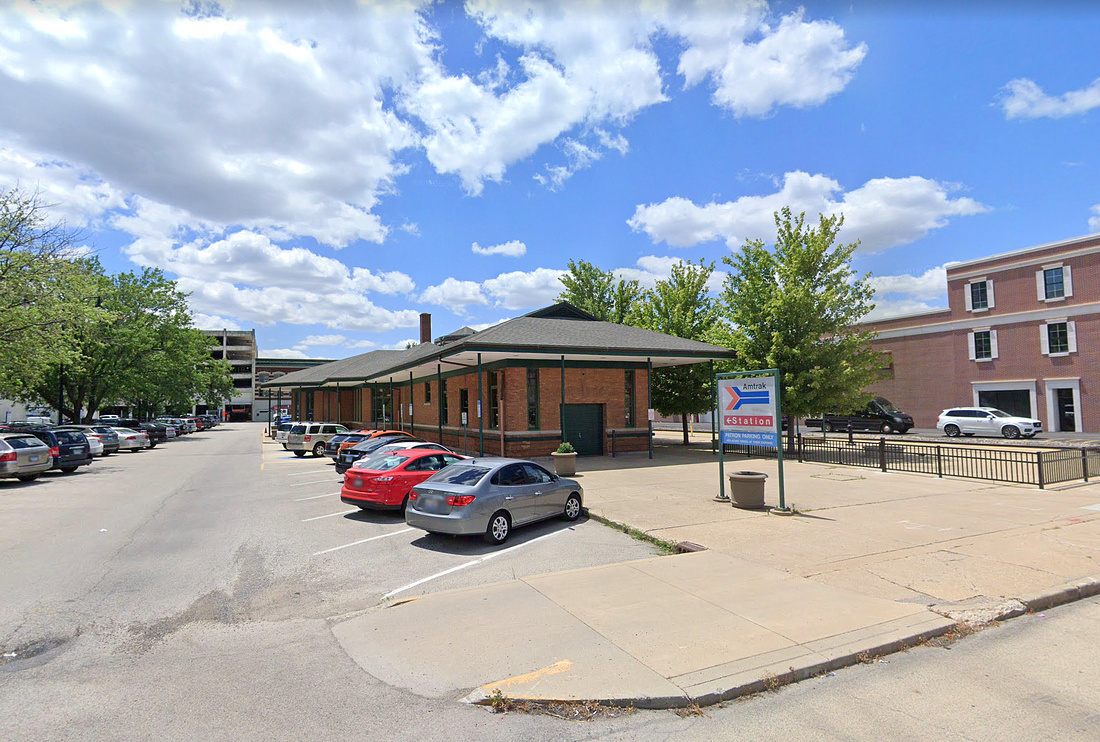 The Amtrak station in downtown Springfield was the nexus of male prostitution activity in the 1980s. Bishop Daniel Ryan and several diocesan priests were frequent visitors. (Credit: Google Maps)

A former student at Springfield’s Little Flower Catholic School, Bergen became a petty thief to support his drug habit. He was among some 80-100 men and women who worked Springfield’s sex trade in the 1980s and early 1990s. When he was on the street, Bishop Ryan was his financial lifeline. He did what the  bishop asked for sexually and the bishop forked over crisp bills drawn either from his wallet or from the ATM near the Cathedral of the Immaculate Conception. The trysts eventually moved from hotel rooms to the bishop’s residence in the cathedral rectory.

Bergen recalled being spirited through a private garage entrance on Lawrence Avenue, past an  old-fashioned walk-in vault and up an elevator to the bishop’s quarters. He was impressed with the marble and gold furnishings in the spacious bathroom. He recalled the huge bed in Ryan’s sleeping quarters and the gold-leaf wallpaper in his study. He even described the bishop’s genital anatomy by size and shape, and noted various liver spots and skin markings on his body. As for the sex, the bishop could be rough with his teen friend. He often told Bergen, “I love you,” “Christ loves you” and “Jesus sent me here to love you,” in the heat of the romps, according to Bergen.

Bergen eventually became deeply conflicted about his homosexual activities with Bishop Ryan. Bergen said he was heterosexual and only engaged in homosexual acts for money to feed his drug habit. He said he begged Ryan to help him get into a church-run drug rehabilitation program, but the bishop refused.

Bergen asked Bishop Ryan to hear his confession after each homosexual encounter. “Go and sin no more,” Ryan would tell him, then add with a wink, “see you later.” This was sacrilege; a latae sententiae excommunicatory offense for any priest. Such an excommunication can only be lifted by the pope. That didn’t seem to worry “The Bish,” as the street people called him. It kept the young man coming back. Bergen said he didn’t want his faith to be smothered by his immoral way of life. Eventually, he said he agreed to share his story publicly in order to clear his troubled conscience and call the bishop to account for years of homosexual predation.

Bergen’s story is among the extraordinary details in a nearly 570-page investigative report compiled over eight years by The Roman Catholic Faithful Inc. (RCF), a nonprofit watchdog group based in Petersburg, Ill. The document was initially filed with the U.S. Conference of Catholic Bishops Office for Child and Youth Protection. It provides an unprecedented closeup look inside a dysfunctional diocese with a chief shepherd who was a wolf — thinly disguised in a bishop’s miter, chasuble and crozier. 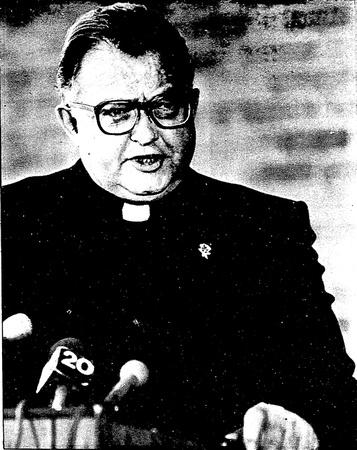 Daniel L. Ryan meets with reporters after being named bishop of the Diocese of Springfield in November 1983. (Credit: State Journal-Register).

Starting in late 1996, RCF went to great lengths to alert the Catholic Church hierarchy in America and Rome to the homosexual activities of Bishop Ryan. The report alleges Ryan regularly used male prostitutes — some were underage teenagers and some had AIDS. He put active homosexual priests in charge of the diocese, ignored other priests who had sex with barely legal-age young men and told at least one priest to embrace being “gay.” Bishop Ryan moved four priests accused of sexually assaulting minors out of state in the 1980s. He initially opposed prosecuting a serial sexual predator in 1985 and was less than cooperative with state agents in a sixth priest sexual-abuse case, we found during an 18-month review of RCF records, lawsuit documents and dozens of other sources that shed new light on Bishop Ryan’s record.

The RCF report said Bishop Ryan sexually harassed some diocesan priests and had consensual sex with others. Ryan denied it all, although he never granted a media interview or provided a detailed response to the myriad charges leveled against him. He died in December 2015 at age 85. He was among the first three Catholic bishops in the United States accused of serial homosexual misconduct and pederasty, some six years before the sex-abuse scandal blew up in the Archdiocese of Boston in early 2002. According to news reports and the records of Bishop Accountability, a watchdog group, the number of U.S. bishops accused of sexually abusing minors now stands at 36. The vast majority of cases involved pederasty, defined as sexual contact or sexual relationship between an adult man and an adolescent boy.

Exposure of such corruption, one would think, would lead to a bishop being removed from ministry pending a third-party investigation and a possible canonical trial. None of that happened. Bishop Ryan had a network of supporters among his brother bishops, the report alleges, that kept him in office even as evidence piled up of sexual corruption and abuse of episcopal authority. The report paints a troubling picture of a corrupt diocesan chancery, a licentious homosexual bishop  and a group of enablers that included two prominent U.S. cardinals, an Illinois bishop, the papal pro-nuncio to the United States and a local network of active homosexual priests. The document describes in detail the anatomy of a coverup of one of the most extensive cases of homosexual corruption in a U.S. diocese.

Stephen G. Brady, president of Roman Catholic Faithful, testified before the National Review Board for the Protection of Children and Young People on March 14, 2003. “Despite many years of rampant sexual misconduct and flagrant abuse of his episcopal authority, which included having sexual relations with underage boys, Bishop Ryan was protected by members of the Roman Catholic hierarchy in order to save themselves embarrassment and in some cases to prevent the spotlighting of their own compromising situations,” Brady said. “The hierarchy involved in this coverup showed no concern at all for Ryan’s victims, both adult and under-age males.” Brady described Ryan as a “predatory homosexual.”

Unlike some instances of priestly pederasty and sexual misconduct in the United States since 1980, the ugly details of Springfield and Bishop Ryan were not completely hidden from the faithful. Brady’s group tried for years to get the hierarchy to investigate and remove Ryan. They started in back channels, and when that failed, took the story public. The RCF investigation alleged serial sexual misconduct, sexual assault, attempted sodomy, abuse of authority, threatening witnesses, misappropriation of Church funds, and abuse of the holy sacraments.

The investigation eventually led to the Vatican and the curia of Pope St. John Paul II. Bishop Ryan was asked to step down several times before the Holy See abruptly announced his resignation in October 1999, the report said. For years afterward, though, Ryan was a bishop emeritus in good standing who led retreats, said Masses, confirmed Catholic youth and assisted in the consecration of an auxiliary bishop in Joliet, Ill. This despite evidence he had attempted rape and sexually abused teenage boys, cruised the streets for male prostitutes, sexually harassed and assaulted diocesan priests and even threatened to “damage” a witness who was cooperating with investigators.