False Shepherd Part III: We Are in Schism

“WE ARE IN SCHISM.” Father John A. Hardon, S.J., minced no words when summing up the situation between Rome and the Catholic Church in the United States in the late 1990s. Few understood the inner machinations of the Holy See better than Hardon, a highly respected theologian and author of dozens of books on the Catholic faith.

PART THREE: WE ARE IN SCHISM

After unsuccessfully lobbying the curia of Pope St. John Paul II to remove Illinois Bishop Daniel L. Ryan for sexual misconduct, Hardon told associates the pope felt powerless to force reform on the American bishops. “The Holy Father wants to prevent a de-facto break — a formal, explicit schism — with Rome,” he said. Hardon echoed the sentiments of his Vatican superior, Edouard Cardinal Gagnon, who nine years earlier privately lamented that the American bishops “will not obey the Holy Father” when he seeks to intervene in U.S. church matters.

Father Hardon’s efforts and reaction are described in a nearly 570-page investigative report compiled over eight years by The Roman Catholic Faithful Inc. (RCF), a nonprofit watchdog group based in Petersburg, Ill. The document was filed with the U.S. Conference of Catholic Bishops Office for Child and Youth Protection. It describes widespread homosexual misconduct and corruption by a sitting U.S. bishop and the years-long effort to remove him from office. This all happened years before the sex-abuse crisis blew up in the Church in 2002 — and was a harbinger of the $3.65 billion that the Catholic Church would pay out in settlements, support and attorney fees as a result of priestly sexual abuse in the United States. 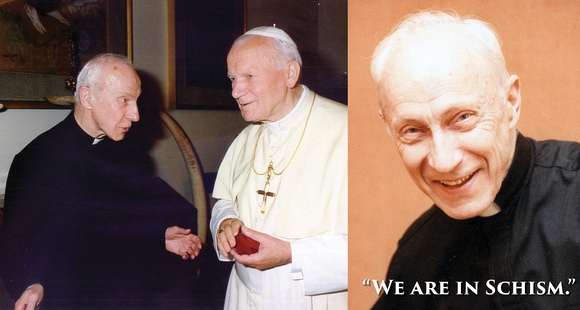 Father John A. Hardon advised RCF on its investigation, and tried to get the Vatican to act on Ryan.

Having failed to get action from the U.S. papal pro-nuncio and the curia at the Vatican, RCF decided the best course of action to remove Bishop Ryan was more publicity. The group mailed 30,000 postcards detailing allegations against Ryan. On one side of the cards was a photograph of two protesters holding a banner outside the Cathedral of the Immaculate Conception. The banner read: “A Disgrace to the Catholic Church! Bishop Daniel L. Ryan of Springfield, IL … Soliciting Sex from Priests! … Paying Teenage Boys for Sex!” The reverse side said Chicago Cardinal Francis George and the Vatican knew about Ryan’s homosexual activity, but did nothing to remove him.

U.S. Postal Inspector Terrence L. Cullivan sent Brady a letter threatening criminal prosecution for the postcard mailing. He cited Title 18 of the U.S. Code that prohibited mailing communications that contain a threat to injure the reputation of another person or accuse the person of a crime. The next day, RCF attorney James Bendell filed a grievance against Cullivan with Attorney General Janet Reno. He said the postcard cannot fall under the U.S. Code prohibitions because its contents are true. He called the postal inspector’s letter a “frivolous threat of criminal prosecution.” Instead of holding back on mailings, RCF sent the postcard to every member of the U.S. House of Representatives and the U.S. Senate. No action was ever taken by the U.S. Postal Service against Brady or RCF.

By October 1999, the Vatican had finally seen and heard enough of Bishop Ryan’s nefarious assignations. On Oct. 19, the Holy See announced Ryan’s resignation and the appointment of his successor, Msgr. George J. Lucas, a seminary rector and former vicar general from the Archdiocese of St. Louis. The dual announcement was carried in L’Osservatore Romano, the Vatican newspaper. 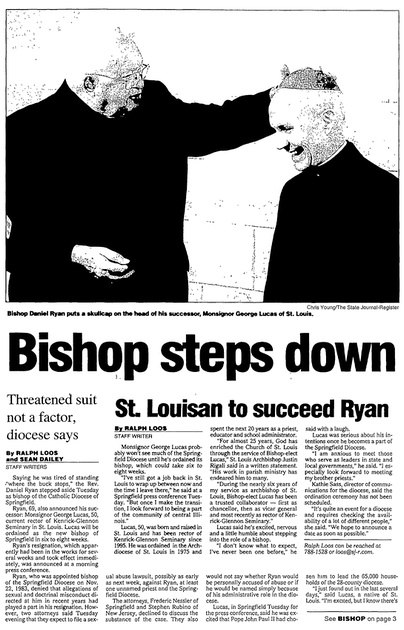 Ryan positioned the move as his idea, prompted by a desire to withdraw from being “where the buck stops.” He said Pope John Paul II “has done me a great service by agreeing to my wish.” Since Bishop Ryan had previously scheduled mandatory meetings with his priests for November, the explanation that he “retired” rang hollow. He was still some six years shy of the mandatory retirement age for bishops. Lucas only found out about his appointment a few days before the Vatican announcement.

Bishop Ryan insisted the timing had nothing to do with the three-year campaign seeking his ouster. Ryan became the third bishop to resign over the previous year after being accused of homosexual misconduct with minors and priests. His departure likely had more than a little to do with a lawsuit filed 10 days later accusing him of covering up the sexual abuse of an altar boy by the Rev. Alvin L. Campbell, 74, arguably one of America’s worst serial pederast priests. Campbell was sentenced to 14 years in prison for sexually abusing altar boys while he was pastor at St. Maurice Catholic Church in Morrisonville, Ill.

The lawsuit, filed by attorney Frederic W. Nessler on behalf of former altar boy Matthew McCormick, alleged Bishop Ryan’s homosexual activity created a lax atmosphere that tolerated sexual abuse of minors in the diocese. The suit included testimony from former prostitutes Frank Bergen and Danny Evans (see Part One: the Figure-Eight and Part Two: Floodgates Open). The suit was later settled for $3 million, divided among 28 victims of priestly sexual abuse. McCormick said Bishop Ryan flew to Texas and tried to persuade him not to file the litigation.

Ryan and his predecessor, Bishop Joseph A. McNicholas, were well aware of Father Campbell’s long history as a predatory sex abuser, court records indicate. Police and prosecutors suspect Campbell sexually abused as many as 100 boys. Several months before Campbell was indicted on criminal charges, Bishop Ryan’s chancery told state police it opposed his prosecution. Ryan denied being uncooperative with investigators, but “in the interest of fairness” would not divulge how long he had known of Campbell’s sex-abuse track record. Campbell was paroled in 1992 and died in St. Louis in 2002.

Father Campbell’s sexual predation started at age 18 when, as an assistant scout master, he had sexual contact with a 14-year-old boy at camp, according to court records. Campbell became “totally preoccupied with sexual activity with young boys between the ages of 14-16,” psychiatrist Dr. Philipp Bornstein wrote in a court-ordered evaluation in 1985. Campbell told Bornstein his pederasty began in 1962 at age 37, a decade after his ordination and just before he enlisted in the U.S. military. Prior to this time, he resisted his strong attraction to young boys, he told therapists.